The blade grind is a crucial factor in the performance, ease of use, and the durability of your hunting knife. But what is it, exactly?

What is a Blade Grind?

Basically, the blade grind refers to how the blade’s cross-section is shaped to produce the cutting edge. The type of grind on your knife has a considerable influence on how successful it will perform a certain task.

Attempting a specific job with the wrong grind on your blade will make that job much more difficult. It could also cause irreparable damage to the edge. It helps then if you have at least a fundamental understanding of blade grind.

This will enable you to recognize the right grind for how you intend to use your knife. Knowledge of blade grind will also allow you to maintain your knife properly.

Some knife enthusiasts regrind their blades to improve blade properties or to create new ones. A regrind makes the cutting edge more effective. It also makes the blade easier to sharpen and maintain.

Think of it as a ‘reshaping’ of the blade edge. There’s a fine balance between getting the edge thin enough to cut well yet keeping enough thickness to avoid weakening it too much. A rule of thumb is ‘As thin as possible but still thick enough’.

If you lack the experience to regrind your blade, I suggest seeking a professional to do it for you. They will do a great job and customize your blade to meet your individual needs.

Blade Grind vs. Design vs. Tang

A lot of different factors and components need to come together to create an excellent hunting knife. 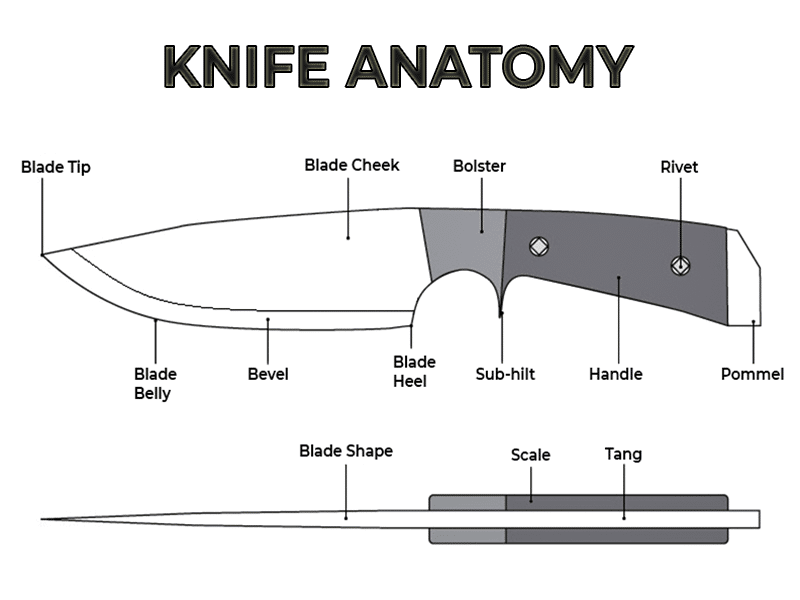 The blade design takes the concept of the knife and turns it into a practical and effective, task-specific tool.

Then there’s the blade tang, which, although you hardly know it’s there, brings together the blade and handle. The tang plays a major role in the comfort of use, longevity, and balance of your knife.

The blade grind is just as important, and if you get it wrong, kinda’ defeats the entire purpose of the knife.

The Different Types of Blade Grinds

Most blades are ground using special grinding machines. It’s a process that needs to be done gradually and carefully to achieve the desired edge.

Unlike polishing, grinding means that a portion of the blade is removed. Polishing occurs after the grind and serves only to create a smooth finish.

Blades are ground at the time of manufacture, as part of a maintenance regime, or when the blade is damaged. Chipped and corroded blades, for example, can be restored with a new grind.

Be aware, though, that there’s always a trade-off between a blade being able to take an edge and keep one. Hard steel can take a sharper grind, yet it is more brittle and can easily break.

Softer steel will be more durable but will never hold a truly sharp edge for long.

Let’s take a look at some of the different types of grinds: 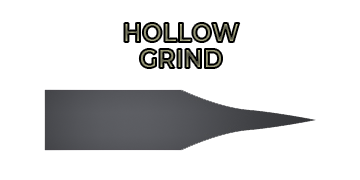 This is probably the most common grind, especially in mass-produced knives. The hollow grind creates a sharp edge that can be extremely thin.

The grind is concave, meaning that the sides of the blade curve inwards and meet to an equal degree in the middle. This is what gives hollow grind knives the sharp cutting edge.

The downside is that the edge is generally weak and can dull very quickly. The grind is not up to tough tasks like chopping wood etc. However, they can make perfectly good skinners.

The hollow grind is the best choice for a fixed blade hunting knife by me. Its surface is concaved, and it starts cutting the target instantly. Besides, the edge might be weaker but stays thin for much longer.

This is the simplest of all grinds and comes in three variations.

Flat grinds are used mostly as kitchen knives and are not my favorite blade grind for a hunting knife. 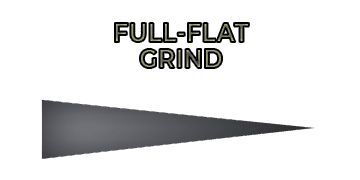 In a full flat grind, both sides of the blade taper evenly from the spine and meet at the edge.

This creates an extremely sharp cutting edge you’ll find in every commercial and most domestic kitchen. The blade is very brittle, requires frequent maintenance, and is prone to break easily. 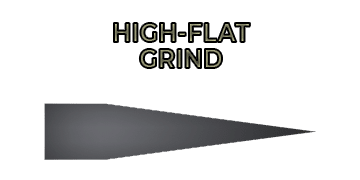 Leaving part of the blade the same width as the spine, the high flat tapers later than the full grind. The tapered sides then meet evenly in the middle of the blade to create the sharp edge.

The bevel created by the late tapering from the spine gives the high flat grind its easily recognizable shape. 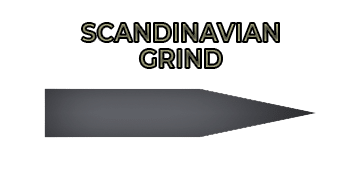 The third and final type of flat grind is the Scandinavian grind. It is similar to the high flat, but the taper begins even closer to the blade’s cutting edge.

This means that more of the blade is the same width as the spine, making it stronger and more durable.

Both high flat and Scandinavian grinds come recommended as survival knives. The main reason for this is that they are easy to sharpen in the field. But they do lose their edge fairly quickly.

Ideal for whittling, the clear bevel makes it easy to see the edge’s position in relation to the wood.

This grind is also good for wood carving and similar projects. It’s also great for cleaning fish and can hold its own with middle-tough tasks like splitting kindling, etc. 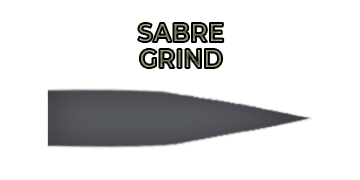 Another common grind, the sabre grind, has a flat primary bevel starting at about the blade’s center.

In fact, both sides continue evenly to form a secondary bevel. The final taper then goes on to create the sharp blade edge.

The sabre grind is best for tough tasks because it belongs to the strongest, heavy-duty grinds. 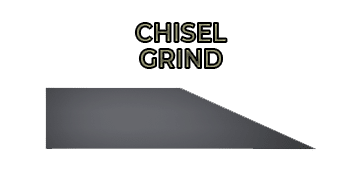 As the name suggests, this is the same grind you’ll find on a chisel. Only one of the sides is ground at an angle of approximately 25 degrees. The other side is left flat.

The chisel grind is the reason why Japanese culinary knives are sharper than most Western blades. Knives with this type of grind can be manufactured in both left and right-handed variations.

Chisel grinds are used a lot in Japanese kitchens. But they are a specialty, and as such, they’re not ideal as everyday knives. 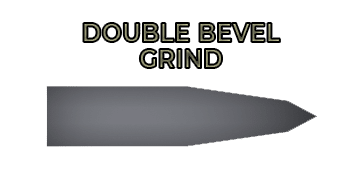 The double bevel grind adds a back bevel just before the cutting edge of the knife. This means that the part of the blade directly behind the edge is thinner.

The double bevel is less sharp than a single bevel, but the blade does gain on resilience. This grind is seen on Japanese swords such as the katana.

The design reduces drag much more efficiently than on the sabre grind of the typical Western sword. 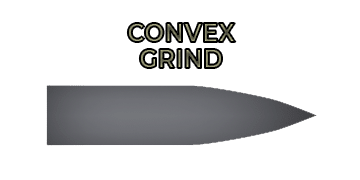 Instead of tapering flat to the edge, a convex grind is curved. But it curves the opposite way to a hollow grind. The convex shape means that a lot of metal is kept behind the edge.

This makes the blade stronger yet still fairly sharp. As the name implies, this grind is used on some axes.

It takes a high level of skill to achieve this grind on a flat stone. The reason for this is because the angle of the taper is constantly changing.

Also, the knife material needs to be thicker to achieve a relatively sharp and efficient cutting edge.

The convex grind is probably the best grind for everyday use. It is a true multitasker and can be used for filleting, splitting firewood, and a whole lot more. 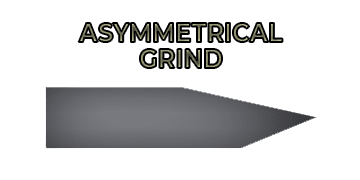 Technically, we could say that any grind which is different on either side of the blade is asymmetrical. The chisel grind is a great example of this.

But the term is usually used to describe a specific secondary bevel. The asymmetrical grind involves honing the blade’s flat side and then removing the burrs from the other side.

This makes the entire grind simple to achieve. The process is quick, and it produces a tough cutting edge.

Also, the blade is much less vulnerable to chipping and other damage. The asymmetrical grind may not be as acute as a sabre grind. But it does create a relatively sharp edge with a lot of strength.

The blade’s grind determines its ability to achieve the task it’s been designed for.

A lot of hunting knife enthusiasts prefer either convex, Scandi, or saber grinds. These grinds are extremely versatile and probably all that an average knife owner will ever need.

For beginners looking to learn how to create their own grinds, I’d recommend they start with the Scandi. It’s hands down the easiest way to sharpen a blade. Simply work the edge with alternate strokes of the sharpening stone.

Even among experienced knife enthusiasts, there’s heated debate about which blade grind is the best for which application. It’s nearly impossible to say which is the optimal grind. It all depends on the application.

But, if I have to choose one, it will be the hollow grind. Since I prefer the drop-point blade style, the hollow grind will be just the thing I want for my perfect hunting knife.

Welcome to my Blog! 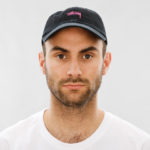 Hi, my name is Michael Goodman. As a skilled hunter and a man of the field, I will show you some sophisticated, intelligent, and useful hunting methods and techniques.

By joining my email list, You can learn some sharp, intelligent and amazing hunting methods.

You have Successfully Subscribed!